By Illinois Manufacturers' AssociationMarch 9, 2021No Comments

SPRINGFIELD – The field of contenders vying for the title of Coolest Thing Made in Illinois has been narrowed further, with voters choosing the Top 8 products to move ahead in the second annual “Makers Madness” contest. Hosted by the Illinois Manufacturers’ Association, “Makers Madness” is a bracket-style tournament in which voters across the state will decide which product is The Coolest Thing Made in Illinois.

Over the past week, voters chose their favorites in eight head-to-head matchups between individual products, with almost 140,000 votes cast in this round. The original field of 311 nominees for The Coolest Thing Made in Illinois has now been whittled down to the Top 8.

Voting for this round is now open and will take place at www.makersmadnessil.com through 11:59 p.m. on March 14. Voters may cast one vote per day in each of the four head-to-head matchups between individual products. Vote totals are reset to zero at the beginning of each round, with the final round of voting set to begin March 16. The contest will culminate with a virtual awards ceremony on March 24 when The Coolest Thing Made in Illinois will be named.

“It has been exciting to watch people from every corner of Illinois get engaged in the Makers Madness contest and cast their votes for their favorite products. From large machinery to sweet treats and cool technologies, these Top 8 products showcase the strength and diversity of Illinois’ manufacturing sector,” said Mark Denzler, president and CEO of the Illinois Manufacturers’ Association. “Manufacturers led the way through the pandemic, and they are leading our economic recovery. Our men and women on factory floors deserve our gratitude and recognition and the IMA is proud to advocate for policies that support them and our communities each and every day.”

“Congratulations to the teams responsible for the Top 8 Coolest Things Made in Illinois – what an accomplishment,” said Sean McCarthy, Comcast’s Regional Vice President of Business Development and Strategic Initiatives. “Comcast Business is proud to partner with the Illinois Manufacturers’ Association on Makers Madness and celebrate the innovations and importance of Illinois’ manufacturing sector.”

The Makers Madness Top 8 matchups are as follows: 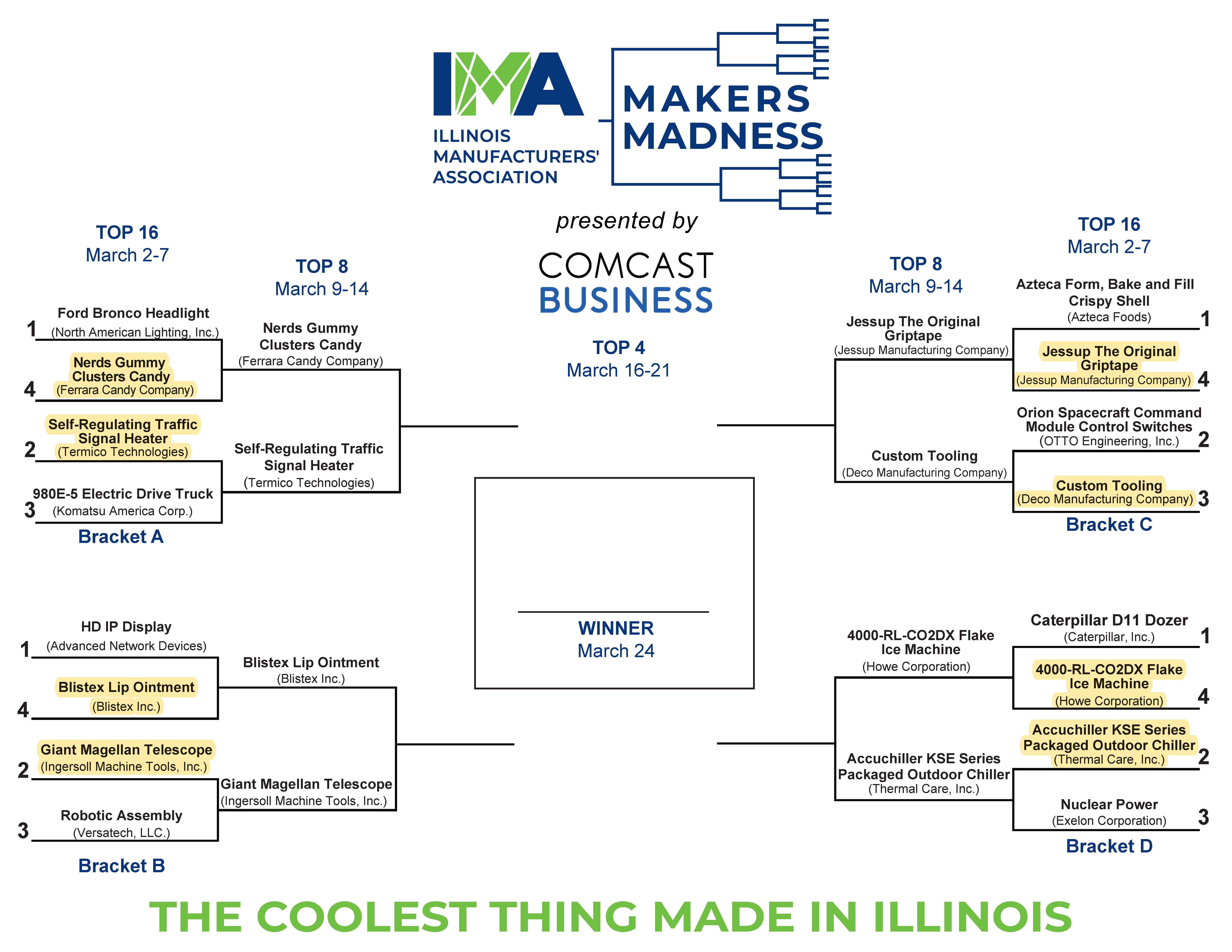