By Illinois Manufacturers' AssociationMarch 17, 2020No Comments

SPRINGFIELD – The field of contenders vying for the title of Coolest Thing Made in Illinois has been narrowed further, with voters choosing the Top 8 products to move ahead in the inaugural “Makers Madness” contest. Hosted by the Illinois Manufacturers’ Association (IMA), the bracket-style tournament showcases the many amazing products made by companies across Illinois along with the range of career opportunities available in the industry.

The Top 8 products were chosen by voters from an initial field of roughly 260 individual products nominated from across the state. More than 93,000 votes were cast over a six-day period in the second round of voting. An additional 97,000 votes were cast during the two-week nomination round.

“Manufacturing makes the world a better place to live every single day and these eight products demonstrate the diversity, influence and strength of the industry, which contributes more than $304 billion to our state’s economy every year,” said Mark Denzler, president and CEO of the Illinois Manufacturers’ Association. “It’s been exciting to see people across Illinois rally behind their favorite products, some of which are family favorites and others that might be capturing imaginations for the first time. Every nominee deserves our recognition and heartfelt appreciation for their positive impact on Illinois.”

The Top 8 will now face off in a second round of matchups to determine which four products will proceed to the finals. Voting is now open at www.makersmadnessil.com and will run through March 22. Voters may cast one vote per day in each head-to-head contest. Votes are reset at the beginning of each new round. The winner of the Coolest Thing Made in Illinois contest will be announced on April 1. Due to precautions put in place amid the coronavirus pandemic, an awards ceremony will no longer take place at the Governor’s Mansion as initially planned. The winner, along with all 16 finalists, will be officially recognized at an event later in the year.

The Top 8 matchups are as follows: 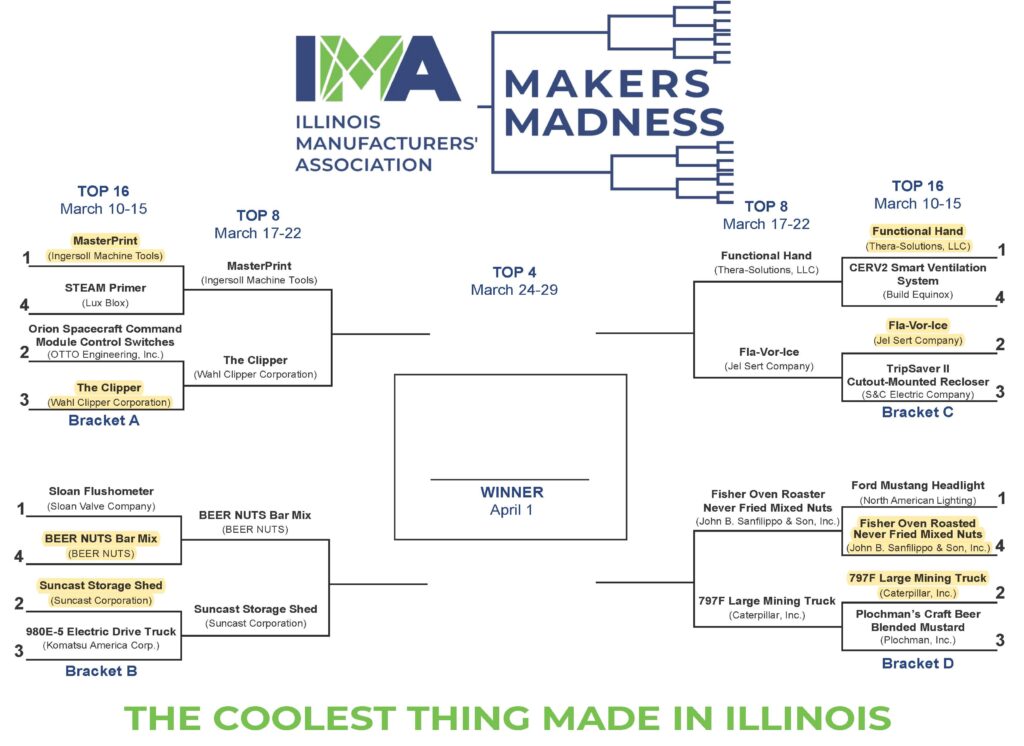