By Illinois Manufacturers' AssociationApril 1, 2020No Comments

SPRINGFIELD – Following eight weeks of rigorous competition, the 797F Mining Truck manufactured by Caterpillar, Inc. in Decatur has been declared the winner of the inaugural “Makers Madness” contest, earning the title of Coolest Thing Made in Illinois. 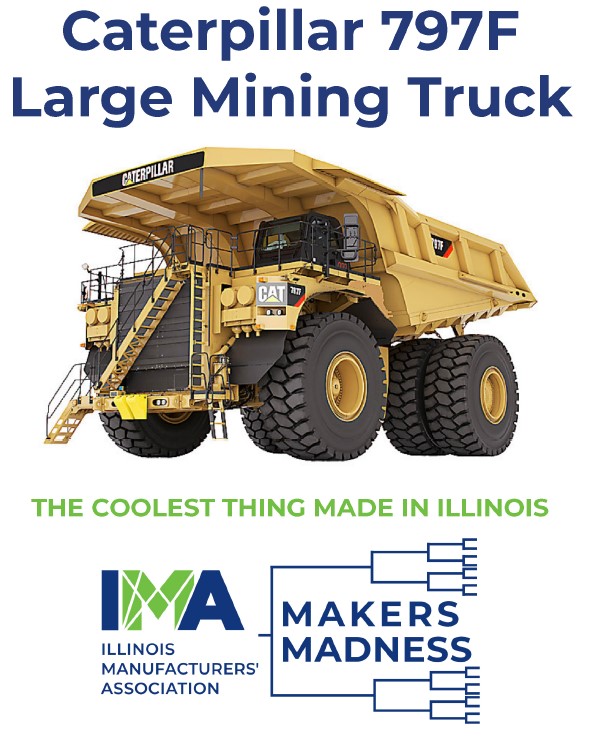 The online bracket-style tournament was hosted by the Illinois Manufacturers’ Association to showcase the many amazing products made by companies across the state along with the range of career opportunities available in the industry. Voters chose the Caterpillar 797F Mining Truck from a field of more than 260 individual products initially nominated from across the state, with nearly 300,000 votes cast over the course of the competition.

Made in Decatur, the Caterpillar 797F is the world’s largest mechanical truck. Standing over 23 feet tall on six 13-foot tires, the 797F has best-in-class productivity and fuel-efficiency. With a top speed of 40 mph, it can haul 400 tons of payload on a single trip, which is equal to 13,000 bushels of soybeans or 686,000 ears of corn.

“The Caterpillar 797F Mining Truck is a great example of American manufacturing, innovation and ingenuity and is well-deserving of the title of Coolest Thing Made in Illinois. Designed for mining and heavy-duty construction, this iconic truck is rugged and dependable,” said Mark Denzler, president and CEO of the Illinois Manufacturers’ Association. “While this contest began before we started to feel the effects of the COVID-19 pandemic, Makers Madness has been a great way to showcase the wonderful products made in Illinois and the great career opportunities manufacturing offers. Every day, our manufacturers are making life-saving products, equipping first responders and ensuring our food supply remains safe and strong.”

Gov. JB Pritzker announced the winner of the competition via video at www.makersmadnessil.com.

“As a businessman, I know how important our manufacturing sector is to Illinois’ economy. We produce over $300 billion of goods a year — right here in Illinois. You are the makers and the doers that drive our state forward,” said Governor Pritzker. “After nearly 300,000 votes were cast in the IMA’s Makers Madness contest, I want to congratulate the entire team at Caterpillar on their win and for building the Coolest Thing Made in Illinois.”

“It is an honor having the Caterpillar 797F mining truck chosen as the Coolest Thing Made in Illinois. This acknowledgment is a direct reflection of the men and women who show up every day to make the best products in the world for the customers we serve,” said Tina Czerwinski, Caterpillar’s Decatur facility manager. “I am very proud of our team.”

Due to precautions put in place amid the COVID-19 pandemic, an awards ceremony will no longer take place at the Governor’s Mansion. The winner, along with all 16 finalists, will be recognized at an event later in the year.