By Illinois Manufacturers' AssociationApril 5, 2022No Comments

SPRINGFIELD – With almost 110,000 votes cast, the field of contenders competing in the third annual “Makers Madness” contest has been narrowed to the Top 16. Hosted by the Illinois Manufacturers’ Association, “Makers Madness” is a bracket-style tournament in which voters across the state will decide which product is The Coolest Thing Made in Illinois. 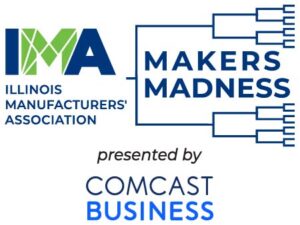 Presented by Comcast Business, the competition celebrates the incredible work of manufacturers across Illinois, which has long served as the backbone of our state’s economy and is helping lead our recovery from the pandemic. Illinois manufacturers produce everything from life-saving vaccines and medical treatments to boundary-breaking electric vehicles and components used for space exploration. Our manufacturers keep store shelves stocked with nutritious food and delectable snacks, as well as create sporting equipment used everywhere from neighborhood fields to professional leagues. They make core structural products from steel, rebar and motors to chemicals and flavorings, and even create high-tech gadgets used for national defense and energy to power our homes and businesses.

More than 400 unique products from every corner of the state were nominated for the 2022 title of The Coolest Thing Made in Illinois. Over the course of two weeks of voting, that field has been narrowed to the Top 16. The top four vote-getters from the initial round of voting are the TCFW375 Series Ice Rink Chiller from Thermal Care, Inc. in Niles, the Libman Tornado Spin Mop from The Libman Company in Arcola, the Orion Spacecraft Capsule’s Aft Bulkhead, Barrel and Tunnel from Ingersoll Machine Tools Inc. in Rockford and the Orion Spacecraft Command Module Control Switches by OTTO Engineering, Inc. in Carpentersville.

“While it’s time to narrow the competition, every nominee for The Coolest Thing Made in Illinois deserves to be celebrated for their creativity, ingenuity, and innovation. Manufacturers truly are the powerhouse of our state’s economy, and we extend our thanks to the hardworking men and women on our factory floors who strive every day to make the world a better place,”

The Makers Madness Top 16 matchups are as follows:

Voting for this round is now open and will take place at www.makersmadnessil.com through 11:59 p.m. on April 10. Voters may cast one vote per day in each of the eight head-to-head match-ups between individual products. Consecutive rounds of voting will take place each week, with vote totals reset to zero at the beginning of each round.  The contest will culminate with an awards ceremony at the Governor’s Mansion on April 27 when The Coolest Thing Made in Illinois will be named. 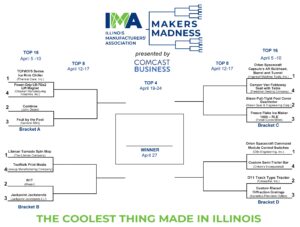 “I’m really excited about all the entries. They show not only the depth and breadth of what’s made here, but that Illinois is truly a national manufacturing leader and trendsetter.” said Sean McCarthy, Comcast’s Regional Vice President of Business Development and Strategic Initiatives. “Congratulations to the Top 16 teams. May the coolest things move on to the next round!”

To ensure the state’s manufacturing sector remains dynamic and strong, the IMA is working to implement several measures to grow manufacturing in Illinois. One key proposal is the MICRO Act, which would create tax incentives for companies to produce semiconductors and microchips in Illinois. Increasing production of these vital components in Illinois would help ease supply chain issues by ensuring access is not controlled by a handful of oversees providers.

The IMA is also backing legislation that would make permanent and modernize a tax credit that incentivizes manufacturers and other companies to invest in research and development projects in Illinois. This will encourage manufacturers to continue to invest in their communities by launching product studies, researching new technologies and testing revolutionary products right here at home.